EXTRAORDINARY LEVEL SHOWN ON THE LAST DAY OF COMPETITION

On the morning of the last day of competition, the quarterfinals in the women’s and men’s categories of the ABANCA PANTÍN CLASSIC GALICIA PRO 2020 have been played.

French surfers are sweeping the ABANCA PANTÍN CLASSIC GALICIA PRO 2020, with Pauline Ado and Maud Le Car being the first classified for the semifinals. Pauline, who faced the Basque Ariane Ochoa, confessed that Ariane has been a very tough opponent to beat, but the Frenchwoman has given her all in an impressive performance that has positioned her as one of the favourites for victory.

n the other hand, Maud Le Car has dominated the Portuguese Carolina Mendes, showing that she knows the Pantín wave well and that she is determined to reach the final.

In the third round, the Portuguese surfer Teresa Bonvalot and the French Cannelle Bulard faced each other, both of the highest level surfers who have achieved very good scores during the competition. The Portuguesa has managed to qualify as first and also obtained the highest final score of the women’s quarterfinals, with 12.57 points.

The last confrontation of the morning was between Nadia Erostarbe and Melania Suárez, in a very close race due to the high level of both competitors, who had to do their best to get past their opponent and get the best scores. Finally, the Basque surfer Nadia overcame the Canary Islands, obtaining the last pass to the semifinals.

In the men’s category, the Portuguese Vasco Ribeiro continues to dominate the competition with very good scores that have propelled him to the semi-final. Ribeiro commented that he is very motivated on this last day of competition and that he is ready to reach the final.

French surfers Charly Quivront, Justin Becret and Maxime Huscenot continue to advance unstoppable in the competition. Becret admitted that once in the water, the only thing that matters is the colour of the lycra and getting the best waves to show your best surfing.

For now, Charly Quivront is the second classified for the semifinals, since he has beaten the Englishman Arran Strong, who has been another great protagonist of this first part of the day as the revelation surfer of this edition.

Also impressive today are the German surfers Marlon Lipke and Dylan Groen, who will face the French Maxime Huscenot and the Basque Aritz Aranburu, respectively, in search of a place in the semifinals. Marlon, who suffered an injury yesterday, is still determined to win. Today he made a great performance, as he himself said, choosing the waves very well to get the highest scores.

The men’s quarter-finals are still being played and the women’s semi-final will begin at 3:30 p.m. 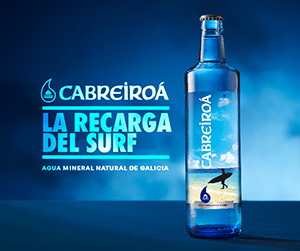